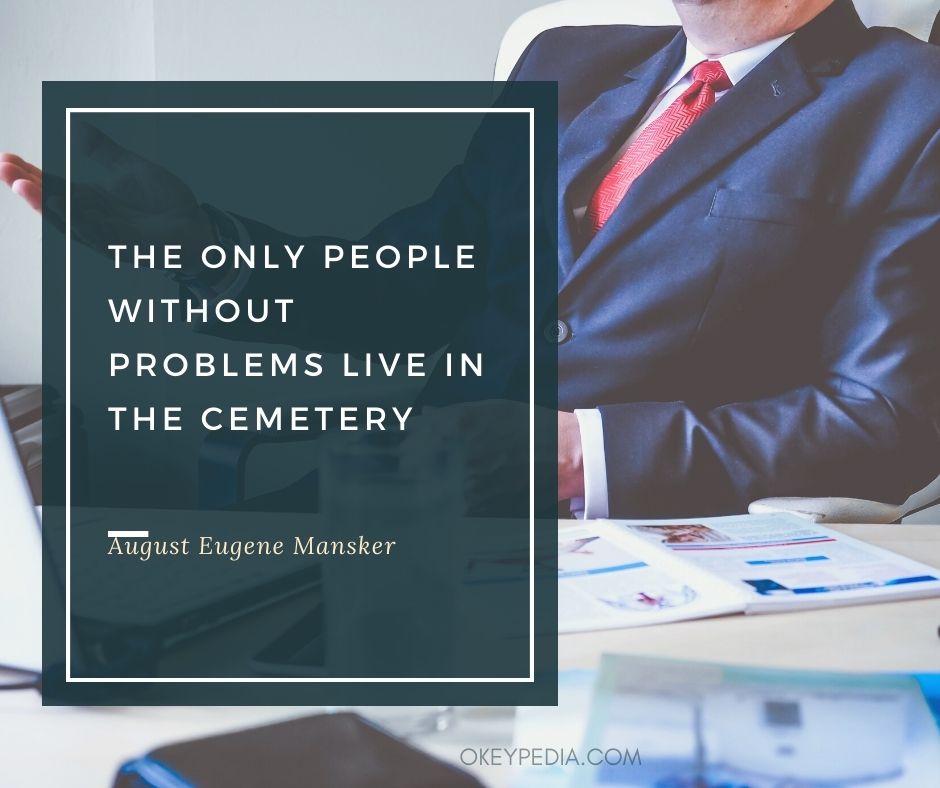 The grave is where the dead rest in peace. The “cemetery” is a plot of land reserved for graves. Cemeteries are public so that everyone can be buried in that place. For example, special graves, religious burials, private family burials, heroes’ grave gardens, and others. Cemeteries are sacred and filled with feelings. This requires a funeral quote or sayings for someone who has died, many quotes about funerals that you can use as an expression of affection for someone who has died.

A cemetery saddens us because it is the only place of the world in which we do not meet our dead again. – Francois Mauriac

The only people without problems live in the cemetery.    – August Eugene Mansker

The cemetery of the victims of human cruelty in our century is extended to include yet another vast cemetery, that of the unborn. – Pope John Paul II

Our cemeteries are full of people who prayed to live. – Annie Laurie Gaylor

The fence around a cemetery is foolish, for those inside can’t come out and those outside don’t want to get in.     – Arthur Brisbane

We think that a powerful and vigorous movement is impossible without differences – “true conformity” is possible only in the cemetery. – Joseph Stalin

History is a great cemetery: men, deeds, ideas are always dying as soon as they are born. – Simone de Beauvoir

My belief in ghosts swings with the wind. But my belief that the cemetery felt happy and not sad-I’ve never changed my mind about that.  – Carol Plum-Ucci

Some lawns have all the cheer of old cemeteries. – Richard Brookhiser

The cemetery is full of indispensable people. – Winston Churchill

I am a cemetery by the moon unblessed.    – Charles Baudelaire

Peace is not the silence of cemeteries, but the song of social justice. – Alfred-Maurice de Zayas

The only place where you can find equality is in the cemetery. – Evan Esar

Every man should keep a fair-sized cemetery in which to bury the faults of his friends. – Henry Ward Beecher

People think too historically. They are always living half in a cemetery.     – Aristide Briand

The cemetery is full of people who thought they could change themselves tomorrow. – Boonaa Mohammed

Military cemeteries in every corner of the world are silent testimony to the failure of national leaders to sanctify human life.    – Yitzhak Rabin

Be peaceful, be courteous, obey the law, respect everyone; but if someone puts his hand on you, send him to the cemetery. – Malcolm X

A crazy man finishes in the cemetery. – Juan Manuel Fangio

The cemetery is filled with indispensable men.    – Charles De Gaulle

The only people without problems are in cemeteries. If you don’t have problems, get on your knees and pray. – Tony Robbins

It’s a small world. When you put it in a cemetery, it is. – Kurt Vonnegut

The newspapers are the cemeteries of ideas. – Pierre-Joseph Proudhon

Being president is a lot like running a cemetery. You’ve got a lot of people under you and nobody’s listening.     – Bill Clinton

Being the richest man in the cemetery doesn’t matter to me. Going to bed at night saying we’ve done something wonderful, that’s what matters to me. – Steve Jobs

The past was but the cemetery of our illusions one simply stubbed one’s toes on the gravestones.     – Émile Zola

You look like a talent scout for a cemetery. – Henny Youngman

If it wasn’t for baseball, I’d be in either the penitentiary or the cemetery. – Babe Ruth

It is easier to move a cemetery than to change a curriculum. – Woodrow Wilson

Forests may be gorgeous but there is nothing more alive than a tree that learns how to grow in a cemetery. – Andrea Gibson

There’s no reason to be the richest man in the cemetery. You can’t do any business from there. – Colonel Sanders

Life is not a static thing. The only people who do not change their minds are incompetents in asylums, and those in cemeteries. – Everett Dirksen

The words ‘Here you can find perfect peace’ can be written only over the gates of a cemetery. – Gottfried Leibniz

Being president is like running a cemetery: you’ve got a lot of people under you and nobody’s listening. Votes: – William J. Clinton

Don’t make a cemetery of your life by burying your talents. – Judy Sheindlin

Because of his military service, Dad was buried in Arlington National Cemetery. – Buzz Aldrin

Bores put you in a mental cemetery while you are still walking. – Elsa Maxwell

Is this why people have walls like cemeteries have gates? – Shalini Guchait

I should never have been convicted of anything more serious than running a cemetery without a license. – John Wayne Gacy

There was only the cemetery itself, spread out in the moonlight like a soft grey hallucination, a stony wilderness of Victorian melancholy. – Audrey Niffenegger

I still remember the day my father took me to the Cemetery of Forgotten Books for the first time. – Carlos Ruiz Zafon

Everyone, deep down within, carries a small cemetery of those he has loved. – Romain Rolland

The Westwood Cemetery is just a few blocks from my home, and a number of my very dear friends are buried there. – Hugh Hefner

I had A Lover’s Quarrel With The World Robert Lee Frost (Old Bennington Cemetery, Bennington, Vermont) Our Darling Eva We Love You. – Eva Gabor

Kennedy had been assassinated a month or so before. So we walked to the grave of John Kennedy and ended our walking symbolically at the Arlington National Cemetery. – Satish Kumar

Science is a cemetery of dead ideas. – Miguel de Unamuno

Don’t die old, die empty. That’s the goal of life. Go to the cemetery and disappoint the graveyard. – Myles Munroe

Cats and dogs believe politicians are like cemetery caregivers; they are on top of everyone, but nobody listens. – Rita Mae Brown

The wing of the Falcon brings to the king, the wing if the crow brings him to the cemetery. – Muhammad Iqbal

Some expressions from various quotes about funerals can give greetings to both the dead and the abandoned. The quotes on can also be used to provide condolences and sincerity to the person left behind.