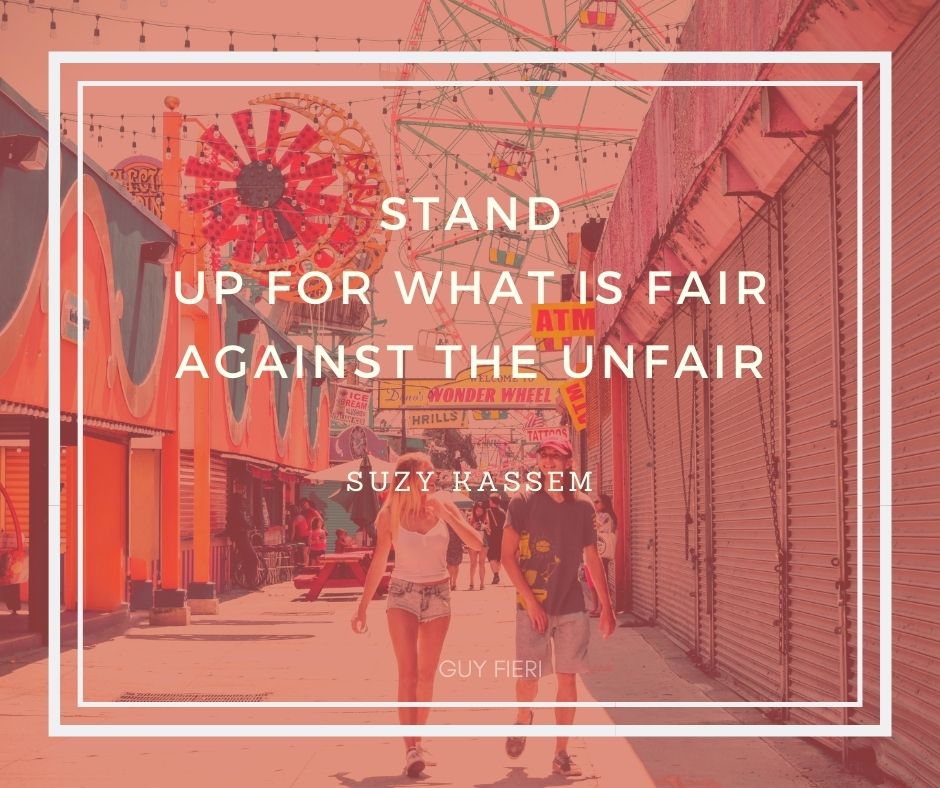 Unfairness is an attitude that is partial or unequal. There is more, and there is less. There are favoritism and many other perceptions. Unfair can also be defined as putting something out of place, or it can be interpreted as one-sided, taking sides; in other words, acting unfairly. An unfair person is an attitude that sided with one of them. Unfair is everywhere. That life brings injustice to it. There are many collections of quotes and “unfair” sayings that you can motivate.

Baseball is a lot like life. The line drives are caught; the squibbles go for base hits. It’s an unfair game. — Rod Kanehl

Life’s unfair. You’re going to have things happen to you. – Will Muschamp

He never made the ten-most-wanted list. It’s very unfair voting. It’s who you know. – Woody Allen

Hard for Bunny who still measured events on a child’s scale of fair and unfair. – Annie Proulx

Life for the majority of the population is an unlovely struggle against unfair odds. Culminating in a cheap funeral. — Siegfried Sassoon

All that is unfair, offends us if it’s not beneficial for us. – Luc De Clapiers

Life is savagely unfair. It ignores our deep-seated convictions and places a disproportionate emphasis on the decisions we make in split seconds. — Chris Cleave

Stand up for what is fair against the unfair. – Suzy Kassem

It’s unfair of a circle to accuse the angle of being sharp. – Multatuli

It is the fairness of life that makes it seem unfair. – Gugu Mona

Life, I’ve learned is never fair. If people teach anything in school that should be it. — Nicholas Sparks

Who says life is fair, where is that written? – William Goldman

Unfair and unkind behavior in exchange for your loving efforts is the rule rather than the exception. – Paul Hauck

All is unfair in love, war and politics. – Amit Abraham

The universe is not fair and it is never going to be fair. — Daniel Keys Moran

All contests are unfair; you just have to win them. – M.F. Moonzajer

Life can be unfair sometimes, but that’s no reason to give up on it. – Anonymous

You will never win an unfair competition since the reward is meaningless. – Cass van Krah

Life happened. In all its banality, brutality, cruelty, unfairness. But also in its beauty, pleasures, and delights. Life happened. — Thrity Umrigar

The nature of everything is the truth and based on justice. We make that unfair and unjust. – Ehsan Sehgal

Sometimes you just need to talk to a four year old and an 84 year old to understand life again. – Kristen Butler

It’s unfair to be fair,For life is unfair. – Farley Maglaya

Life is never fair, and perhaps it is a good thing for most of us that it is not. — Oscar Wilde

The only thing that makes life unfair is the delusion that it should be fair. – Steve Maraboli

Whatever you do, never run back to what broke you. – Frank Ocean

It’s unfair to think that we can do what we do with the intensity that we do it and expect injuries to not happen. – Daniel Cormier

Life is cruel and unfair, my friends, and that is fact. — Stephen Jenkins

Life isn’t fair. It never will be. Quit trying to make it fair. You don’t need it to be fair. Go make life unfair to your advantages. – Robert Kiyosaki

On the whole, life is unfair in the way it works out. It is a game played without an umpire! — Ursula Bloom

Try to learn to let what is unfair teach you. – David Foster Wallace

Life’s not fair; why should I be? — Margaret Atwood

There’s a difference between the fact that the universe is inherently unfair on a cosmic level, and the fact that life is unfair because people are actively making it so. — John Scalzi

Life can be unfair sometimes, but that’s no reason to give up on it. Life is unfair but remember sometimes it is unfair in your favour. – Peter Ustinov

Life is not fair, get used to it. — Charlie J. Sykes

“Life is unfair” “The goalposts will move” and above all: “other people matter”. – Christopher Peterson

So I came to the realization: Nothing in life is unfair. It’s just life. — Rob Lowe

It is unfair to believe everything we hear about lawyers, some of it might not be true. – Gerald F. Lieberman

Life is not fair. Anyone who says it is, or even that it ought to be is a fool or worse. — David Brin

Life is unfair and improve is a great metaphor of that. – Mike Birbiglia

Sometimes, life is unfair, and you have to suck it up and move on and not use it as an excuse. – Robert Kraft

The happiest people don’t bother about whether life is unfair. They just concentrate on what they have. — Andrew Matthews

Rationality doesn’t exist; right is absence of wrongness and wrong is what seems to be unfair. – M.F. Moonzajer

If life is unfair with everyone, doesn’t that make life fair? — Thabang Gideon Magaola

Some expressions from various quotes about unfair can make you change your life more useful and quotes on motivation in life experiences for the better.