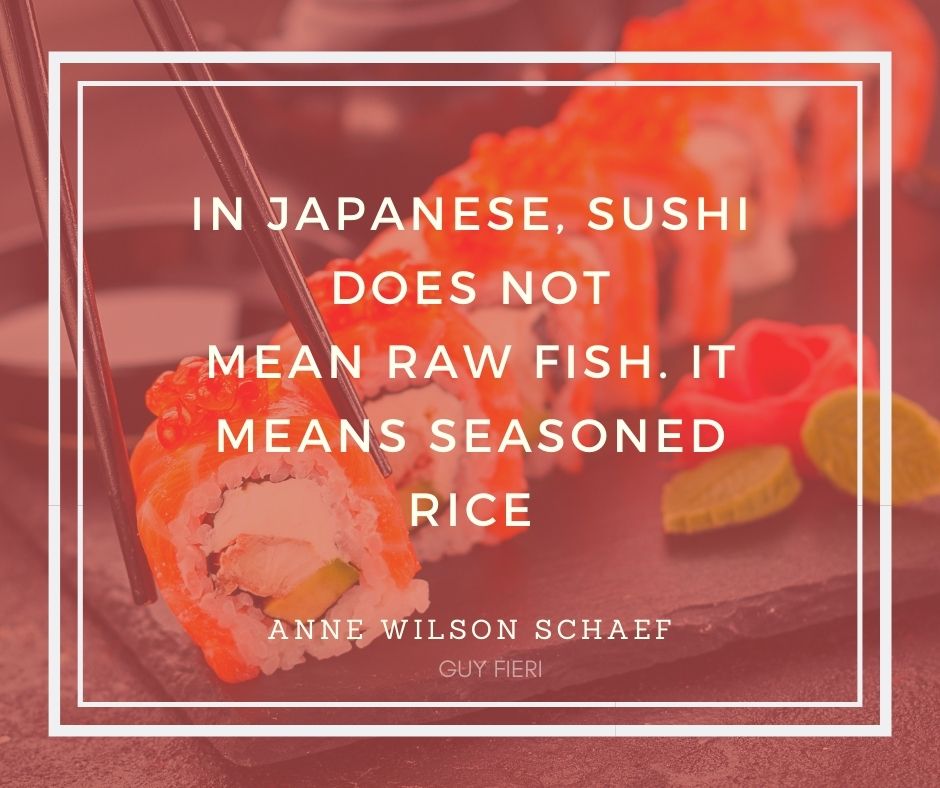 Sushi is a dish from Japan made from seasoned rice with fish, eggs, or vegetables. The sushi rolls are formed in thin sheets of seaweed. Japanese dish with a lump of rice and sweet vinegar wrapped in a sliced vegetable or fish wedge. Often there is seaweed wrapped around the rice, but sometimes there is none. In addition, vegetables or fish pieces are placed on top of the rice with the seaweed wrapped vertically. There are many collections of “sushi” quotes and sayings that you can use as motivation.

Sushi rocks my world as no other food can! Anthony T. Hincks

Making sushi is an art, and experience is everything. – Nobu Matsuhisa

I love sushi. But after too much of it, it just starts to taste like a dead animal that hasn’t been cooked. Amy Lee

I want to take you away from this, “I say, motioning around the kitchen, spastic.” From sushi and elves and stuff. Bret Easton Ellis

A good rule to remember for life is that when it comes to plastic surgery and sushi, never be attracted by a bargain. – Graham Norton

But eating a tuna roll at a sushi restaurant should be considered no more environmentally benign than driving a Hummer or harpooning a manatee. Daniel Pauly

You know how kids dream of being soccer players or actors? Well, my dream was to be a sushi chef. – Nobu Matsuhisa

I was in a sushi bar and it dawned on me – how could I discriminate between a cow and a fish?– Carre Otis

Yes! Yes! There’s the attitude. Where was that girl during the race? Off getting sushi? Doug Solter

The fine art of preparing sushi is something that you watch and learn. – Nobu Matsuhisa

I love eating sushi and eating raw and clean – no pasta and bread. Low carbs is what works for me.– Chrissy Teigen

Kids are now eating things like edamame and sushi. I didn’t know what shiitake mushrooms were when I was 10 – most kids today do. Emeril Lagasse

A sushi chef has to spot the best-quality fresh fish instantly. – Nobu Matsuhisa

In LA, I live on sushi or salad.– Denise Van Outen

One of my favorite things to make is homemade sushi. I know how to make the rolls and it’s really fun to do. – Carly Rae Jepsen

I love sushi, I love fried chicken, I love steak. But there is a limit to my love. – Jonathan Safran Foer

Tuesday nights are sushi nights, so we go out then. – Al Roker

They kept saying ‘It’s sushi-grade!’ And I’m like… ‘Put some soy sauce on this. Get me some rice. And cook it. And then get me out of here.– Jennifer Lawrence

Did you know that the Jews invented sushi? That’s right – two Jews bought a restaurant with no kitchen. – Jackie Mason

I could eat my body weight in sushi. Mikey Way

Sushi is my favorite thing to do in L.A. – Liam Hemsworth

I always thought that bagels and lox was my soul food, but it turns out it’s sushi.– Sara Sheridan

And yes, we do have some food. Maybe you’d like to join us? Unless you want to stick with your sheep sushi. – Michael Grant

I love your sushi roll, hotter than wasabi. I race for your love, Shake-n-Bake, Ricky Bobby. Drake

Although, I didnt really like sushi until I moved out to L.A.– Scott Wolf

I never eat sushi. I have trouble eating things that are merely unconscious. – George Carlin

I love sushi, but I’m not going to write a column about it. Joel Stein

In Japanese sushi restaurants, a lot of sushi chefs talk too much. – Masa Takayama

I love lean meats like chicken, turkey. I’m obsessed with sushi and fish in general. I eat a lot of veggies and hummus.– Shawn Johnson

We’ve got a name for sushi in Georgia… bait. – Blake Clark

I still eat sushi, though I’m trying my best to have my last sushi roll. Kim Basinger

Teach a man to fish and you feed him for a lifetime. Unless he doesn’t like sushi, then you also have to teach him to cook. – Auren Hoffman

After Nashville sushi and a long debate on Bob Dylan, we went into Woodland Studios at 10 pm that night for a look around, and jammed for 5 hours solid.–Robyn Hitchcock

You have to eat good! I eat gorgeous food. I eat sushi, I eat meat, I eat steaks. I eat more than you, I’m sure. Tanya Dziahileva

The fine art of preparing sushi is something that you watch and learn. – Nobu Matsuhisa

It always freaks me out when I go to a sushi place and there’s a Mexican.–Chelsea Handler

Sushi is not really about flavor as much as texture. Everything is usually made bite-size so you can eat it in one bite, which is more proper. – Tim Hoffman

In general I love to eat anything. I enjoy anything that is well prepared, a good spaghetti, lasagna, taco, steak, sushi, refried beans. Martin Yan

I’ll continue to climb, trying to reach the top. But no one knows where the top is.–Su Shi

I have to say, sushi freaks me out more than almost anything. – Kate Beckinsale

Some phrases from various quotes about sushi can make you change your life to be more passionate and quotes on motivation in life experiences for the better.