Skip to content
HomeHome Decor68 Too Late Quotes and Saying 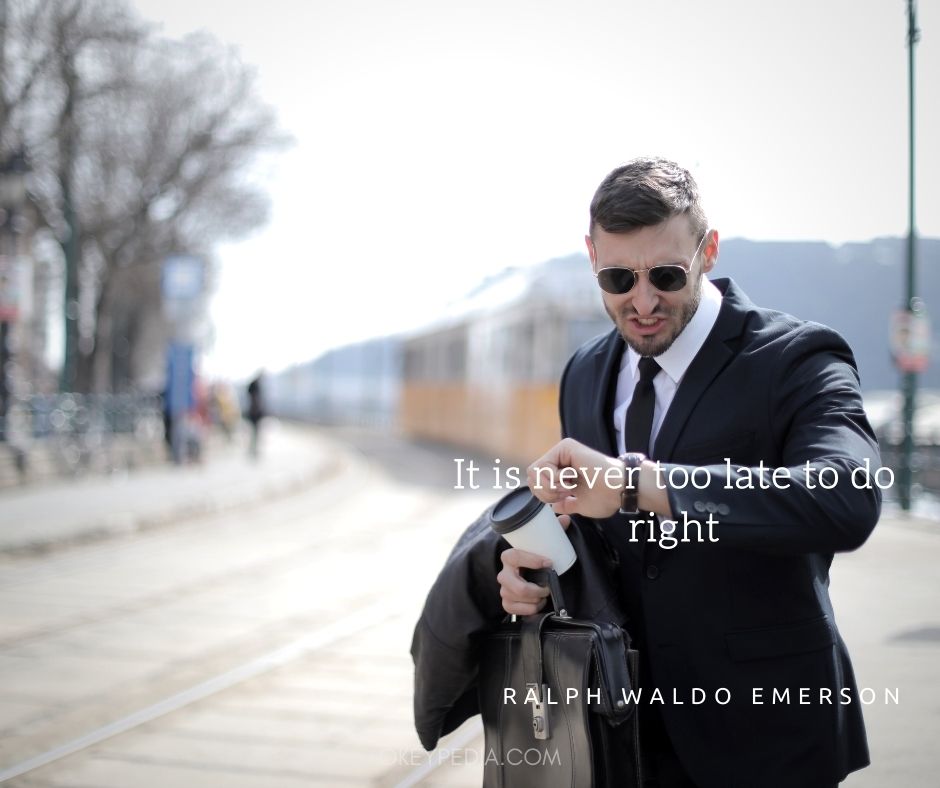 Too late can be said to be past the specified time. Being late is a habit for someone who is difficult to break. The cause of someone arriving late can be done intentionally or unintentionally. The role of a person and the discipline of the person itself is a solution or a very effective way to deal with someone coming late. Someone sometimes feels late, and sometimes you feel too late. But life is never too late to follow your dreams. There are many collections of “late” quotes and sayings that you can use as motivation.

It is never too late to do right. Ralph Waldo Emerson

Whilst we deliberate how to begin a thing, it grows too late to begin it. – Quintilian

Better to be too early and have to try again, than be too late and have to catch up. — Aaron Levie

Beware of missing chances; otherwise it may be altogether too late some day. – Franz Liszt

Tomorrow is nothing, today is too late; the good lived yesterday. Marcus Aurelius

That’s the story of life – when you start enjoying people, it’s always too late. – Marjane Satrapi

There’s no use doing a kindness if you do it a day too late. – Charles Kingsley

For what it’s worth, it’s never too late to be whoever you want to be. F. Scott Fitzgerald

It’s not too late to develop new friendships or reconnect with people. – Morrie Schwartz

Never too late to learn some embarrassingly basic, stupidly obvious things about oneself.– Alain de Botton

Life’s tragedy is that we get old too soon and wise too late. – Benjamin Franklin

The simple reality of life is that everyone is wrong on a regular basis. By confronting these inevitable errors, you allow yourself to make corrections before it is too late. – Barry Ritholtz

I have come too late into a world too old.– Alfred de Musset

Even a correct decision is wrong when it was taken too late. – Lee Iacocca

It is never too late to give up your prejudices. Henry David Thoreau

Tis not too late to seek a newer world.– Alfred Lord Tennyson

It’s never too late to be great. – Jordan Burroughs

If you wait until you are ready, it is almost certainly too late. Seth Godin

It is never too late to correct our mistakes. And if we do not, we risk repeating them. – Lisa Madigan

I think it’s never too late to learn – or it’s a lesson that’s good to continue learning – that you need to treat everyone on a set with respect.– Alison Brie

Never too late to change your relationship with somebody in your life. – Anderson Cooper

Between too early and too late, there is never more than a moment. Franz Werfel

You better wake up before it’s too late, or they’ll be doing your makeup down at the coroner’s place. – Kool Moe Dee

The older generation sat looking at the younger, and Kat wondered exactly when and how the baton had been passed. She wanted to know if it was too late to give it back.– Ally Carter

It is never too late to be what you might have been. – George Eliot

Say it before you run out of time. Say it before it’s too late. Say what you’re feeling. Waiting is a mistake. Anonymous

Courage, my friends; ’tis not too late to build a better world. – Tommy Douglas

Time is a factor in all action. An imperfect scheme put into action at the proper time is better than a perfect one accomplished too late.– Andre Maurois

A fool too late bewares when all the peril is past. – Elizabeth I

It is not too late to take another path. David Suzuki

You cannot do a kindness too soon, for you never know how soon it will be too late. – Ralph Waldo Emerson

To me, Ennis stands for the conservative side of America. He’s the biggest homophobe in the whole movie – culturally and psychologically – but by the time he admits his feelings, it’s too late.– Ang Lee

We’re not at the point of trying to stop global warming; it’s too late for that. We’re trying to keep it from becoming a complete and utter calamity– Bill McKibben

There’s only two times in life, there’s now and there’s too late.– Anh Do

Happy is what you realize you are a fraction of a second before it’s too late. – Ali Smith

Thunder may sound a warning, but it’s too late for the lightning. – Anthony T.Hincks

It’s always about timing. If it’s too soon, no one understands. If it’s too late, everyone’s forgotten.– Anna Wintour

Taste the cherries now while they’re ripe because later is always too late. – Marty Rubin

There is an immeasurable distance between late and too late. Og Mandino

It’s never too late to have a happy childhood. – Berkeley Breathed

Satan, that great angler, hath his sundry baits for sundry tempers of men, which they all catch greedily at, but few perceive the hook till it be too late.– Anne Bradstreet

If you see a bandwagon, it’s too late. – James Goldsmith

That’s the trouble with losing your mind; by the time it’s gone, it’s too late to get it back.– Bill Bryson

It is never too late to start growing. Rick Warren

Life, we learn too late, is in the living, the tissue of every day and hour. – Stephen Leacock

It’s far too late for anything but magick, as the future is clearly up for grabs.– Antero Alli

A decision will be made before it’s too late or soon thereafter. – Michael Eisner

Know your worth. Know what you deserve. Know when it’s time to move on. Antoine de Saint-Exupéry

Apologizes are pointless, regrets come too late. What matters is you can move, on you can grow. – Kelsey Grammer

Don’t forget until too late that the business of life is not business but living.– B. C. Forbes

Make sure you tell the people you love that you love them. Loudly and often. You never know when it might be too late. – Tom Hiddleston

Sometimes we stare so long at a door that is closing that we see too late the one that is open. Alexander Graham Bell

The President has apologized for his activities with Monica Lewinsky. These were too little, too late, in my opinion.– Barbara Cubin

There is nothing that you can’t overcome. So it’s never too late for happiness. – Pepa

It’s never too late. Don’t focus on what was taken away. Find something to replace it, and acknowledge the blessing you have. Drew Barrymore

It’s always too late for sorries, but I appreciate the sentiment. – Neil Gaiman

It’s only too late if you don’t start now.– Barbara Sher

Everything in his life now seemed to signal: too late. – Iris Murdoch

Better three hours too soon than a minute too late. William Shakespeare

Or is there no such thing as ‘too late’? Is there only ‘late’ and is ‘late’ always better than ‘never’? I don’t know.– Bernhard Schlink

Some phrases from various quotes about being late can make you change your life for the better for yourself and other’s quotes on motivation in life experiences for the better.